“Christ is risen!” will be heard regularly from now through the end of the school year during chapel at Unity Lutheran School, East St. Louis, Ill.  In a school where just a fourth of the students a 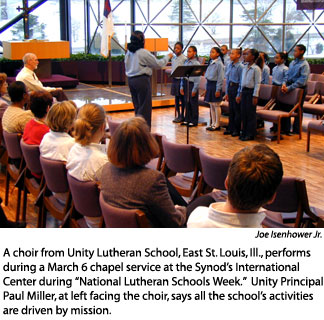 re members of any church, responses will be no less enthusiastic: “He is risen indeed! Alleluia!”

Lunchtime highlights the diversity at Sunbeams Lutheran School in Kent, Wash., where one kindergartner may eat seaweed and rice with chopsticks, another will have vegetables in a wrap, and another eats a peanut butter and jelly sandwich. Their native languages may be different, but they all thank one God for their food.

“These testify to the Ablaze! movement in Lutheran schools,” observes Terry Schmidt, associate director of School Ministry with the LCMS Board for District and Congregational Services.  “They provide a safe, high-achievement learning environment where there is opportunity to share the love of Jesus Christ.”

Schmidt refers to the “M&M principle” — mission and ministry — in Lutheran schools.  Mission reaches to nonbelievers and unchurched school children and their families and in service to the community.  As ministry, schools nurture students through quality education and Christ-centered relationships.

In presentations on Lutheran schools, Schmidt often emphasizes the principle by tossing small bags of M&M candy to his audiences.

He also is a collector of facts about the effects of Lutheran schools: six children baptized at a service at Hephatha Lutheran School in Anaheim, Calif.; nine school families completed adult instruction and joined Christ Lutheran Church in Costa Mesa, Calif.; and how the Holy Spirit brought a reluctant little boy to confess his faith at Grace Early Childhood Center in Houma, La.

“As we provide Word and the Sacrament of Baptism to children, they bring the Word home to their parents,” Schmidt comments.  “We have even seen the Holy Spirit working in teachers who previously had no faith.”

In its compilation of statistics from the 2006-07 school year, the LCMS schools department reports 3,910 children baptized, and 3,232 adults baptized or confirmed through the influence of Lutheran schools.  It reports 1,368 early childhood centers, 1,018 elementary schools, and 102 high schools.

Schmidt told Reporter that he received “many reports of mission-and-ministry-related activities from our schools” during this year’s March 2-8 National Lutheran Schools Week.

Principal Paul Miller emphasizes that Unity Lutheran School, now in its fifth year, is a mission school.  “Everything we decided about school policies, location, and tuition are all driven by that mission goal,” he says.  “Of our 68 students, we have two Lutherans and about a fourth of the students belong to other Christian churches. But most would be considered unchurched.

“We wanted families without church homes so we could teach those kids about Jesus — and reach parents as well,” Miller continues.  “We pray all the time that the right students would enroll.  We spend a lot of time inviting them to church and to be involved in church.”

Unity was begun by the Southern Illinois District.  Its principal and six teachers are called or contracted through the district mission board.  The district provides a subsidy, but the school also receives financial support from congregations and individuals.

The school also charges tuition.  Miller says, “I tell parents we charge tuition because when you get something for nothing, that’s what you figure it’s worth.”  Tuition is based on a sliding scale and all families receive financial aid.

Unity Lutheran Church, Miller says, “was not built to be a school.”  The 68 students — in kindergarten through fourth grade — meet in various locations.  The fourth grade, for example, meets in the church balcony.  The school is adding one grade per year, so next year’s fifth grade next fall which, unless the school finds an alternative site, may have their classroom in a corner of the church’s gymnasium. Miller says the school is currently negotiating to purchase a former Roman Catholic school a few blocks from Unity.

Denise Pacilli serves half-time as director of Sunbeams, operated by Lutheran Church of the Cross in Kent, Wash.  Sunbeams enrolls nearly 70 students — from at least 14 cultural backgrounds — in preschool and kindergarten.  English is a second language for most students.

“Communicating with parents is a constant challenge, yet we are given the opportunity and privilege to share Jesus with children from many backgrounds,” she says.  “The first thing we try to do is warm acceptance of families.”

Pacilli also serves half-time as director of the New Hope Early Childhood Center in Pacific, Wash., where the community is lower-income but no less diverse.  The preschool enrolls 18 children who come from Hispanic, Russian, Ukrainian, and Anglo households.

While communicating in a wide variety of languages is difficult, Pacilli says the ministry is easy.  “Jesus takes care of that.  All we do is love these children and their families, help them feel comfortable and accepted, and take the time to listen to them carefully for understanding.”

Schmidt’s “M&M principle” is echoed in the Milwaukee area, where Lutheran Urban Mission Initiative, Inc. (LUMIN) owns one school and manages two other Lutheran schools.  All three reach to students through the Milwaukee Parental Choice Program, which allows students from low income families to attend a school of their choice

“Out of our 350 students, more than 300 attend under the Choice program,” comments Dick Laabs, LUMIN president.  “We consistently find that approximately 30 percent are completely unchurched and 50 to 60 percent may claim a variety of church affiliations from recognized denominations to storefronts.  Frankly, we view all of them as an outstanding outreach opportunity.”

Laabs says LUMIN has two objectives: One is to present a high quality academic program in an urban community where kids generally perform below grade level.  The second is to reach with the Gospel message of God’s love in Jesus Christ.

LUMIN conducted a survey earlier this year and received a 60 percent response from parents.  Giving “yes,” “no,” or “unsure” answers to 30 questions, they only gave a 100 percent response to two questions — one pertained to the school environment helping to develop the faith life of students.

“We were very pleased with that feedback because