The conference will feature speakers discussing the role of faith in citizenship and the benefits of religious freedom.  Highlighted will be an observance of the 10th anniversary of the 1998 religious freedom victory of KFUO Radio against the Federal Communications Commission. 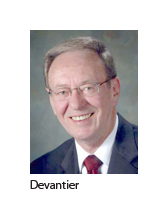 Started in 2007, the National Lutheran Alliance is a partnership of Concordia Seminary, St. Louis; Concordia University Wisconsin, Mequon; and the Lutheran Education Association (LEA) based in Chicago.

Its purpose is “to build relationships, encourage good citizenship, bring the expertise and experience of Lutheran entities to help strengthen government, give expression to values and theological positions, and to develop internship and other education opportunities for a variety of individuals and groups,” according to its Web site www.nationallutheranalliance.org.

Devantier led the effort to save KFUO Radio during a nine-year religious freedom litigation when he served as executive director of the LCMS Board for Communication Services (1982-2000).  From 2001 to 2006, he was national director of an adoption education program initiated by the U.S. Congress and headquartered in the Washington, D.C. area.

“The alliance is an expansion of the work the partners are already doing in our nation’s capitol,” said Meyer.  “By joining forces, the partners and other entities in the Synod will be able to have increased visibility and will be able to engage in new and more effective public relations and educational activities that will benefit many.  The alliance looks forward to working with a wide variety of LCMS-related entities.”

The Clara and Spencer Werner Foundation provides major funding for the alliance.