LCMS ministry in rural areas and small towns can be summarized with a couple of 50 percent statistics:  Slightly more than half of the 6,000-plus LCMS congregations are in communities with fewer than 15,000 population, and about half of the residents in those areas have no ongoing relationship with Jesus Christ.

Seeing the numbers as opportunities, a collaboration of LCMS entities is seeking a staff “catalyst” to identify and coordinate resources for existing congregations and for starting new ministries in rural areas and small towns.  The National Missionary Catalyst for Rural and Small-Town Mission will serve under the LCMS World Mission-National Mission Team and also coordinate with a recently formed National Rural and Small-Town Task Force. 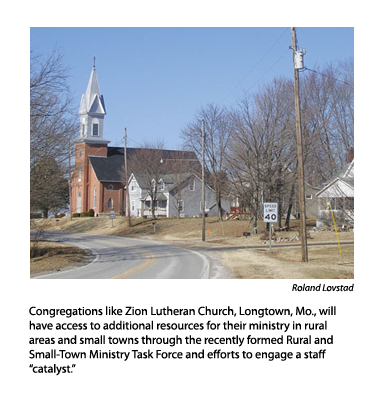 “This is an effort to focus resources on the heartland of the Missouri Synod,” said Dr. Robert Scudieri, associate executive director of LCMS World Mission.  “It will help existing congregations revitalize their ministries, and we believe it will open doors to start new missions where other doors have closed.”

The staff position will be developed in conjunction with the task force.  Organized in November and chaired by Rev. Russell Sommerfeld, president of the LCMS Nebraska District, the task force includes professional church workers, lay leaders, and national and district staff.  The task force is identifying common mission challenges and unique attributes of rural areas and small towns, as well as exploring ways for congregations to build partnerships and serve as mission outposts.

A gift from Ken Schroeder of Higginsville, Mo., will enable the hiring of a “catalyst.” As the work continues, Scudieri said the staff person will be a “network-supported missionary” whose ongoing work will be underwritten by donations from individuals and congregations. He added, “It’s what Paul and Barnabas did as they depended on the support of the churches in Antioch, and other churches became supportive as they were started.”

Scudieri said the organizers are looking for “a teacher, organizer, go-getter, entrepreneur, and ordained — someone with a history of starting new things.”

The task force states that its primary mission is “to encourage and equip professional workers and lay leaders of rural small-town congregations to experience anew the joy and delight of missional vision.” By working through LCMS districts, the task force said it will “strive to guide and direct God’s people in rural and small-town communities with a ‘can do’ passion for people to discover fresh ways to engage their changing culture for Christ.”

Also collaborating in the work will be the Saint Paul Institute for Education (SPIFE), located on the campus of Saint Paul Lutheran High School and Ministries in Concordia, Mo.  The center will serve as a training base, offering leadership training modules in Concordia as well as providing workshops in other districts.

“In the rural small-town culture, people can get discouraged in their outreach and ministry,” remarked Dr. Ralph Geisler, who serves as the SPIFE interim director and leads rural and small-town ministry workshops.  “They need someone to come alongside them to help them see the potential.”

While there may be declining population in rural areas, Geisler added, “I can show you congregations that are actively reaching into the community.  Often, 50 percent of the people in the rural small-town communities don’t have an ongoing relationship with Christ.”

Of the 6,000 congregations in the Synod, Geisler’s research found 3,200 are located in communities with fewer than 15,000 people.

Scudieri added, “There is eagerness on the part of districts to embrace and work collegially with congregations and SPIFE.  This will expand a role of initiating new missions and churches in rural and small towns.”  Also collaborating will be the Center for U.S. Missions on the campus of Concordia University, Irvine, Calif., and the Synod’s new Transforming Churches Network that focuses on revitalizing congregations.

The initial focus of the task force will be Midwest agri-business communities, and future efforts will address communities with mining, forestry, fishing, and leisure industries.

Part of the effort is to identify local “indigenous” leaders to become involved in ministry, according to Scudieri.  Citing the new Specific Ministry Pastor program at both seminaries, he added, “We hope to discover leaders within the rural small-town contexts who will be raised up using distance education strategies.”

Roland Lovstad is a freelance writer and a member of Immanuel Lutheran Church, Perryville, Mo.