With the input of a small group of scientists, pastors, teachers, and church workers, the LCMS Commission on Theology and Church Relations (CTCR) expects to gain input for a future report on Christian stewardship of the environment — plus ideas for formats that will make the information useful to a wider constituency within the Synod. 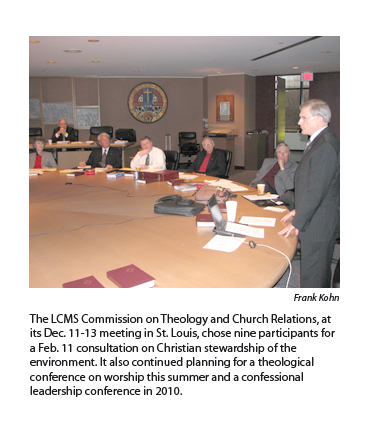 During its Dec. 11-13 meeting in St. Louis, the CTCR selected nine individuals to participate in a Feb. 11 consultation on Christian stewardship of the environment. The commission also continued planning for a theological conference on worship this summer and a confessional leadership conference in 2010.

In addition to preparing printed documents, the CTCR is looking to other formats for sharing resources with the Synod’s congregations, schools, colleges, and seminaries, according to Dr. Joel Lehenbauer, CTCR executive director.

“The CTCR wants to be proactive, to anticipate trends, and facilitate dialogue about topics facing society and the church,” Lehenbauer commented.

The February consultation will supply some of those ideas. Involving nine persons — clergy and laity — the consultation will include presentations and discussion to shape an outline for a report on Christian stewardship of the environment. Dr. Charles Arand, a CTCR member and professor of systematic theology at Concordia Seminary, St. Louis, will make one of the presentations. Lehenbauer said the participants will be asked to generate ideas for formats to communicate issues related to responsible environmental stewardship from a Christian and biblical perspective.

The consultation begins a response to a 2007 convention resolution asking the CTCR to address environmental issues “in a scriptural and confessional way” that could be used by Synod entities, including schools and churches. The consultation is supported by a grant from Thrivent Financial for Lutherans Foundation.

In response to another convention resolution, the CTCR continued to discuss plans for a “Model Theological Conference on Worship, Music, Liturgy, Hymnody and Song,” a joint project with the LCMS Commission on Worship.  The 2007 convention resolution called for a conference to “build greater understanding of our theology of worship and foster further discussions of worship practices that are consistent with this theology.” The event, proposed for Aug. 18-20, 2009, also involves input from the Council of Presidents.

The CTCR also discussed a Confessional Leadership Conference that will involve theologians from partner churches, the International Lutheran Council, and LCMS seminaries and universities. The conference is proposed for 2010 and leads to preparation for the 500th anniversary of the Lutheran Reformation in 2017.

The conference will explore the doctrine of the church as set out in the Scriptures and Lutheran Confessions. Lehenbauer said the conference also could lead to resources on topics like church and culture, the relationship between the church’s confession and its mission, and inter-Christian relationships. “Churches around the world are struggling with these issues,” he said.

During the December meeting, a CTCR subcommittee began careful review of the draft of “The Creator’s Tapestry,” a document on the Scriptural relationship of man and woman. Lehenbauer said the subcommittee will continue review of the revised draft during the next CTCR meeting Feb. 12-14.

The CTCR also adopted a response to Resolution 3-05 from the 2007 convention, which asked for further guidance on “serial” or “seriatim” prayer. The brief response will be posted on the CTCR Web site in early 2009.

Lehenbauer also reported two recent Spanish translations of CTCR documents. “Women in the Church” already has been posted on the CTCR Web site, at www.lcms.org/?515. “Human Sexuality: A Theological Perspective” will be posted by the end of January. Rev. Juan Beckmann and Beatriz Hoppe prepared the translations.