Funeral services were held Jan. 13 in New York for Rev. Richard John Neuhaus, a Roman Catholic priest and former LCMS pastor who championed conservative issues in the church and society through his writing and participation in public forums. He died Jan. 8 of complications of cancer. He was 72. 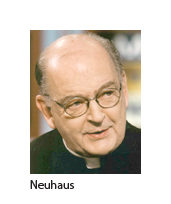 Father Neuhaus was a 1961 graduate of Concordia Seminary, St. Louis. He served as pastor of St. John Lutheran Church in Brooklyn from 1961 to 1982, later joining the American Lutheran Church, which became part of the Evangelical Lutheran Church in America (ELCA). He was ordained a Roman Catholic priest in 1991, a year after converting to Catholicism.

A prolific writer, he wrote or edited many books on contemporary issues. He founded the journal First Things in 1990 and once edited the Lutheran Forum Letter. In his book, The Naked Public Square, published in 1984, he argued that religion and religious values were wrongly being excluded from American society.

In 2005, Time magazine listed him among the 25 most influential evangelicals in America, noting his “under the radar” influence with the administration of President George W. Bush. In a statement at the death of Father Neuhaus, Bush said, “He was also a dear friend, and I have treasured his wise counsel and guidance.”