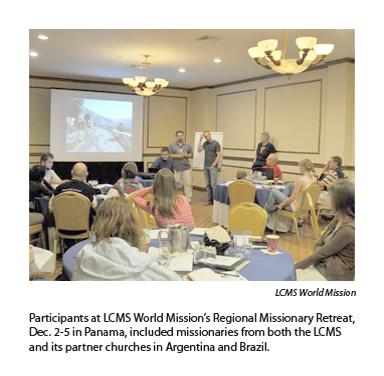 The gathering, which took place at the Playa Bonita Resort on the Pacific coast of Panama, provided an opportunity for missionaries from both LCMS World Mission and LCMS partner churches, such as the Lutheran Churches of Brazil and Argentina, to step out of their respective mission fields and catch a much needed breath of fresh air.

“It was like an oasis in the desert,” said Walter Ralli, an Argentinian Lutheran missionary supported by LCMS World Mission working in Seville, Spain. “Like a glass of fresh water it refreshed the thirsty soul of the missionary.”

The retreat included presentations, devotions, prayer, and lots of conversation.

Rev. Vern Gundermann, chaplain for the LCMS International Center in St. Louis, led daily devotions based on “The Lord’s Prayer.”

The devotions were preceded by Spanish and English praise and worship, led by Panama missionaries Jack Johnson and Heidi Heisterkamp, and Paraguay deaconess intern Jennifer Bolognini.  Presentations from both the LCMS World Mission staff and board and Latin America missionaries occupied the remainder of each day’s sessions.

Most valuable, according to the missionaries, was time spent in conversation — whether at mealtime, during breaks, or sitting outside.

“I loved the fellowship,” said Bolognini.  “I loved meeting all the missionaries — the new ones and the ones who have had a lot of experience, hearing from them and [getting] their advice and their comfort and encouraging words.”

Dale Saville, who works with the rural Lutheran Finca farm project of the Lutheran Church in Venezuela, said it was the best retreat he’s attended as a missionary “because it was much more a two-way conversation.  The missionaries got to explain a little bit about what they really do out there [and] everybody learned much more about what was going on.”