Training strengthens ability to respond to next disaster

The need for disaster-response training hit home with Tom Brown last year when flash floods turned lives upside down throughout Indiana, including those of hundreds of fellow LCMS members.

“All but five of our 92 counties were impacted,” said Brown, who serves as the Indiana District’s Disaster Response co-coordinator. “We were in the process of forming a Disaster Response team, so we got on-the-job training.  This will help us do a better job next time.” 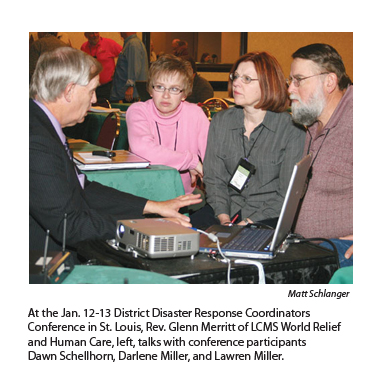 Brown, a retired engineer and member of Immanuel Lutheran Church in Valparaiso, was referring to the second annual District Disaster Response Coordinators Conference Jan. 12-13 in St. Louis. Hosted by LCMS World Relief and Human Care_(WR-HC), the conference provided training aimed primarily at people who serve as District Disaster Response coordinators — laypeople and church workers who are key players in the comprehensive LCMS disaster-response initiative to equip districts and congregations to respond to people in need.

The Synod’s mercy arm presented the conference as a continuing step to strengthen the LCMS congregation-based disaster-response initiative that has been in the works since Hurricane Katrina devastated the Gulf Coast in 2005.

Many conference participants expressed confidence that since that deadly storm, the Synod at-large, districts, and congregations have improved their disaster preparedness, largely through intentional planning and training.

“We had many members of the church respond after Katrina, but now they are much better at it — better prepared,” Wille said.

A portion of the conference focused on National Incident Management System training — standardized, on-the-scene, all-hazards preparation, led by Michael Dahmer, an instructor for the U.S. Department of Homeland Security. “When something happens and church volunteers hop in a van, what happens next?” asked Dahmer, whose presentation outlined disaster-response guidelines that help ensure responder safety and efficient use of resources.

While training strengthens LCMS ability to respond to the next flood, fire, or tornado, conference attendees also expressed concern about challenges over which they have little control — tighter budgets and dwindling resources. LCMS World Relief and Human Care  Executive Director Rev. Matthew Harrison acknowledged the impact of economic challenges on faith-based organizations.

“These are times that require courage,” said Harrison, who addressed the role of mercy in disaster response, highlighting Scripture that calls for care of the needy.  “As Christians, we give and we care for others because that’s who we are.”

Along with courage, LDR’s Massey stressed the need for continued cooperation.  “With these lean times we’re coming into, it’s all the more important for us to work together as effective partners,” said Massey, who spoke about LDR, a collaborative ministry of the Evangelical Lutheran Church in America (ELCA) and the LCMS. LDR responds to disasters primarily though Lutheran social ministry organizations serving as LDR affiliates. LCMS WR-HC works directly with districts, professional church workers, and congregations to enhance ministry to their members and their local community.

Massey applauded the collaboration that is central to the LCMS disaster-response initiative.  “We in the ELCA and the LCMS commend Glenn (Merritt) and World Relief and Human Care for their excellent work in designing a disaster response program in which we can all work together and complement one another,” he said.

Rev. Carlos Hernandez, director of Districts and Congregations with LCMS WR-HC, emphasized the critical role of the congregation and pastoral care when a disaster strikes. “All other disaster entities count on that congregational disaster-response capacity already on the ground long before they arrive and long after they all pull stakes,” he said.

Merritt — who worked as a police officer before he entered ministry — said the LCMS disaster-response initiative has helped develop “an exceptional communications network that has translated into volunteer manpower and financial support.”

“The chaos experienced during and following Katrina is still a very real threat,” Merritt said. “However, as this disaster initiative continues to strengthen throughout our districts, the LCMS should be poised to respond in a much more collaborative and cooperative manner in the future.”

Mark Minick, senior vice president of external relations with Lutheran Social Services of the South (an LDR affiliate based in Austin, Texas), said he was encouraged by Lutheran coordination after Hurricane Ike devastated parts of the Lone Star State last September. “We saw so many examples of the church being the church, seeing needs and responding. Even in tough economic times, Lutherans find ways to plug in and use their gifts,” he said.

Although no one can predict the next disaster, Minick said he has no doubt that “Lutherans will still show their care — because of who we are. Like Rev. Harrison said, we must have courage.”