The old saying that appearances can be deceiving might be applied to the latest financial, membership and worship-attendance statistics reported by LCMS congregations, considering the number of congregations that actually did report. 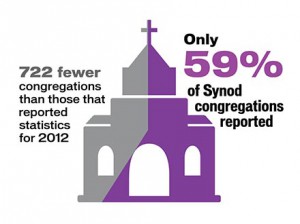 First, here is some of the latest financial and statistical information congregations reported for 2013.

A summary of reports from LCMS congregations indicates that total contributions they received in 2013 declined slightly, compared with 2012; the decline in total baptized and confirmed members for 2013 was not as steep as for 2012, and average weekly worship attendance in 2013 rose slightly.

The Synod’s Office of Rosters and Statistics annually compiles congregation-reported figures and amounts that congregations submit via an electronic form. To compile the statistics in the categories above, that office each year also uses the most recently reported figures from non-reporting congregations, regardless of the year for which they were reported.

Scott Kostencki of Rosters and Statistics told Reporter that 91 percent of all LCMS congregations have reported their statistics at least once in the past three years.

“Through convention actions,” Hartwig said, “our congregations have established requirements for their own membership in the Synod, including their provision of annual statistical information. They have recognized the importance of this information for the Synod’s planning of current and future ministry efforts.

“Accurate information is even more important when the Synod does its official business at its conventions,” he continued. “With only a 60 percent annual response, we can’t know for certain whether our regions are properly designated and our electoral circuits are properly formed. We must continue to work toward 100-percent participation.”

The Office of Rosters and Statistics also compiled other statistics from the reports that LCMS districts submitted during 2013.

And Rosters and Statistics reported other information directly from the reports of the 59 percent of the LCMS congregations reporting for 2013. Among those compiled statistics is information indicating that all but two categories in the numbers for Sunday schools and other classes increased among congregations, with dramatic rises for weekday religion classes.

For 2012, all six of those Christian-education-related statistics rose, compared with figures reported for 2011.

The average attendance at weekly worship services of congregations that reported in 2013 was 154, compared with 151 for 2012.

The numbers of “official acts” in 2013, such as baptisms and confirmations, declined when compared to those in 2012. For last year, congregations reported that:

The 2015 Lutheran Annual, available by year’s end from Concordia Publishing House, will include statistical information for 2013.

CUW, Bethesda pioneer program for those with disabilities