LBT kicks off 50th anniversary with May events

Lutheran Bible Translators (LBT) in Aurora, Ill., is launching in May a yearlong celebration of its 50th anniversary on May 19. 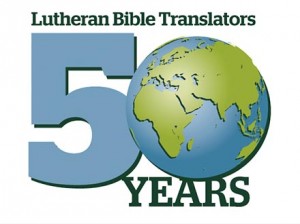 Since that date in 1964, when the LCMS Recognized Service Organization was incorporated, LBT has completed translations of more than 30 New Testaments and other parts of Scripture for some 7 million people worldwide.

Its current 85 programs of language development along with Scripture translation and “engagement” programs involve 51 language groups in 15 countries.

To celebrate its anniversary, LBT is offering some 20 dinner events in U.S. cities nationwide. The events will include a social hour, followed by a meal and guest speakers, including LBT missionaries.

The first two events are scheduled for:

The guest speaker at both kickoff events in May will be the Rt. Rev. Dr. Paul Kofi Fynn, president of the Evangelical Lutheran Church of Ghana, who will address the theme “Golden Opportunities — Past and Future.”

Past LBT Executive Director Dr. Marshall R. Gillam, who serves on the anniversary planning committee, said Fynn “has a long-time history of partnership” with the Synod’s world-mission office and LBT — supporting and encouraging the work of Bible translation. Fynn also is “well-known in many regions of the LBT family,” Gillam told Reporter, and is a “significant figure” among Lutherans in Africa, where most LBT translation projects are focused.

Also significant, he said, are the sites of the first two kickoff events: in the Chicago area, where LBT is now based, and in southern California, where LBT was founded.

Other dates — through March 2015 — and sites are being finalized. Cities being considered include Milwaukee; Phoenix; Orlando and Tampa, Fla.; Dallas/Fort Worth; Houston; San Jose, Calif; and Seattle.

Dr. Michael Rodewald, LCMS regional director for Africa who will begin his service as LBT’s executive director June 1, said, “Lutheran Bible Translators has a great vision — God’s Word for all, no matter what language we speak, wherever we are.”

Rodewald — who is preparing to move from South Africa to the United States in early May — said he plans to attend as many of the LBT anniversary events as possible. He encouraged others who are interested in the work of LBT to also attend to help the organization “celebrate not only what has happened through Bible translation in the last 50 years, but also what shall happen in the next.”

Bible translation is a long process — the typical New Testament translation can be completed in 12 years “if there are no serious delays,” according to LBT.

And the need for Scripture translations continues to be huge: two-thirds of the nearly 7,000 spoken languages in the world have no portion of Scripture available — “That’s about 350 million people without any portion of God’s Word in their mother tongue,” LBT reports on its website.

David Snyder, LBT’s interim executive director, described the twofold purpose of the dinner events: “to celebrate the fact that millions of people now finally have the Word of God in their own language because of the work of the many Lutherans involved in Bible translation through LBT,” and “to expose many more fellow Lutherans to this global ministry that is so important to the expansion of the kingdom of God — how can the church grow without the Scriptures?”

He said he expects attendees to include people who:

Snyder urged those who have been involved in LBT’s work over the years to attend the anniversary events to help celebrate “all the good things that have happened through their efforts.”

The events are free and open to the public. A free-will offering will be taken.