LCMS Life Ministries braves the cold for March for Life 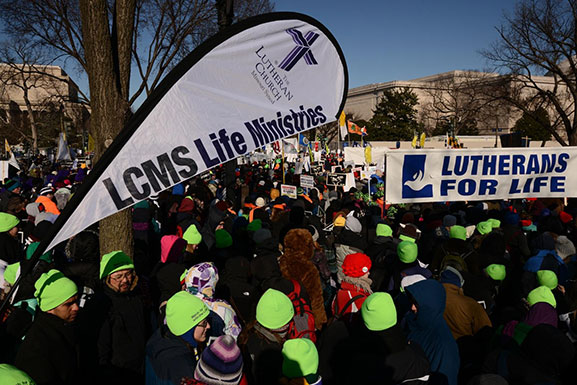 WASHINGTON, D.C. — It was bitterly cold in Washington, D.C., on Jan. 22, 2014, the 41st anniversary of Roe v. Wade, but the frigid temperatures didn’t stop dozens of LCMS Lutherans from participating in the annual March for Life.

When the march began, the temperature was 15 degrees with a wind chill of minus 2.

LCMS Life Ministries and Lutherans For Life marched together from the National Mall to the steps of the U.S. Supreme Court building. Many of the Lutherans wore green stocking caps reading, “March for Life with the LCMS,” to help them stay warm.

The march is scheduled to end about 3 p.m. EST, when the high for the day is expected to be 22.

“Okay, fingers are frozen from tweeting but this is worth it,” Szeto wrote on his Twitter feed, @edszeto4life.

The march marks the court’s Roe v. Wade decision that legalized abortion in the United States in 1973.

The day began with an LCMS Divine Service of worship at Immanuel Evangelical Lutheran Church in Alexandria, Va., followed by a breakfast at the church.

'Hope' reason for March for Life