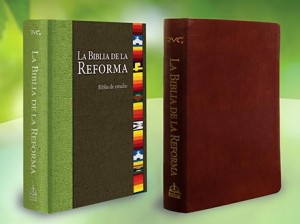 The Bible uses the text of the Reina Valera Contemporánea translation and includes the distinctly Lutheran in-depth study notes from The Lutheran Study Bible, which have been translated into Spanish. It also has more than 220 thematic articles, 120 graphics and diagrams, and 6,000 cross-references.

In addition, this new Spanish-language study Bible includes commentaries from Martin Luther and more than 130 theologians from around the world. Its preface tells the parallel stories of Martin Luther, the reformer who first translated the Bible into German and started the Reformation, and Casiodoro de Reina, who simultaneously completed the first Spanish translation.

“La Biblia de la Reforma is an unprecedented accomplishment for CPH, one for which we give God all the glory,” said the Rev. Dr. Héctor Hoppe, senior editor of Multilingual Resources for CPH.

“The Hispanic community around the world has long been awaiting a Spanish-language study Bible of this caliber that is solidly grounded in Lutheran doctrine,” Hoppe said. “That vision is finally coming to fruition just in time to honor the 500th anniversary of the Reformation and all that the key theologians of the Reformation era stood for. Luther is, of course, well represented, but his trifold emphasis on grace, faith and the Holy Scriptures is something that will resonate with believers of all Protestant denominations.”

The Rev. Alex Merlo, pastor of Iglesia Luterana San Pablo, a Hispanic ministry in Aurora, Ill., said he has been waiting for this Bible for several years.

“It is a tremendous need in my ministry where I love to equip and teach my disciples to become better Bible leaders, better proclaimers of the Good News. I did order already 25 Bibles to give to my students so they can enjoy and learn the Word of God with wonderful information,” Merlo said.

Of this new resource, the Rev. Dr. Leopoldo Sánchez, associate professor of Systematic Theology and director of the Center for Hispanic Studies at Concordia Seminary, St. Louis, said: “It’s the most extensive Bible with commentary in the Spanish language that I have seen in a long, long time.

“I think that this will be a good way to reintroduce Spanish-speaking audiences to the Lutheran Reformation,” said Sánchez. Because of the commentaries, the Bible “actually gets you into Luther’s thought and Lutheran theology, and it does it in a way that is accessible to audiences that know something about Luther, but nothing very deeply,” he added.

To order La Biblia de la Reforma, click here or call 800-325-3040. Prices quoted above do not include shipping charges.