By the time the next Synod convention comes around in the summer of 2016, the church ought to have a newly revised “Explanation” of Luther’s Small Catechism. 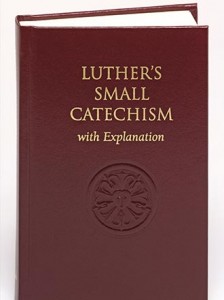 The last time the Explanation of the catechism was revised came in 1991 — 23 years ago. Since that time, according to Res. 3-13A adopted by last summer’s LCMS convention, “many changes in the understanding of morals, civil law and natural law in church and society” have come about.

Addressing these societal “changes in understanding” — and even legislation — in such areas as same-sex marriage, beginning-and-end-of-life issues, drug legalization and religious liberties is a main rationale behind the impetus to update the Explanation.

Starting Feb. 10, the LCMS Commission on Theology and Church Relations (CTCR), with the concurrence of the Synod president and the help of Concordia Publishing House (CPH), begins surveying the rostered workers of the Synod for input on the current and future state of the Explanation.

There are some 21,745 ordained and commissioned ministers, both active and retired, currently rostered by the LCMS.

The survey will be electronic, with a series of six monthly e-blasts to the roster — the half-dozen installments corresponding to the six chief parts of the catechism. Accordingly, the first part of the survey pertains to the Ten Commandments.

“We don’t want to overwhelm our people by sending them the whole survey all at once,” said the Rev. Dr. Joel Lehenbauer, executive director of the CTCR. “That’s why we’re doing the six monthly installments based on the six parts.

“We want those surveyed to have time to reflect,” he said, “and we invite them to give us any sort of feedback they want.”

Lehenbauer noted that it was Synod President Rev. Dr. Matthew C. Harrison who hit upon the idea of doing a pre-revision survey. Resolution 3-13A asks only that the CTCR, the president’s office and CPH “field test the proposed revisions and make any further revisions necessary before publication”; Harrison, however, saw wisdom in gathering input from the church before doing all the work, and the members of the CTCR agreed.

CPH, in the person of the Rev. Paul T. McCain, publisher and executive director of editorial at the publishing house, prepared the first draft of the survey, describing it as “simple and open-ended.”

“We believe this tool [the survey] will provide a great many insights for this effort,” he said.

As for the project’s timeline, “It certainly is our goal to have this assignment finished by the next convention,” said Lehenbauer.

The first step, as noted, is the six-month survey. Then will follow the roughly yearlong drafting process to be undertaken by a committee working under the oversight of the CTCR. By late summer 2015, according to Lehenbauer, “We hope to be ready to do the field-testing phase that the resolution calls for, whereupon, after adequate time for final revisions and with the consultation and consent of the president’s office, we will inform the 2016 convention that the Explanation is complete and ready for publication.”

The first sixth of the survey is provided via the Feb. 10 e-blast. It is accessible through a link in an email cover letter penned by Harrison, who asks recipients to give this portion of the survey, and the ensuing five portions, their “very careful attention.”

In a draft of the letter shared with Reporter, the president says, “The most important contributor to this project … is you” … because you “are the ones who are using the Explanation to teach the Christian faith to children and adults at various ages and in various stages of faith and life.”

Lehenbauer went out of his way to emphasize that the revised Explanation is not a new translation of the text of the catechism itself, last amended in 1986. “It’s important that people realize this,” he said. “All we are doing is updating the Explanation part of Luther’s Small Catechism with Explanation.”

“This revised Explanation will be an essential resource for the Synod,” said McCain, “and Concordia Publishing House is delighted to be working closely with the president of the Synod and the Commission on Theology and Church Relations to help provide it.”