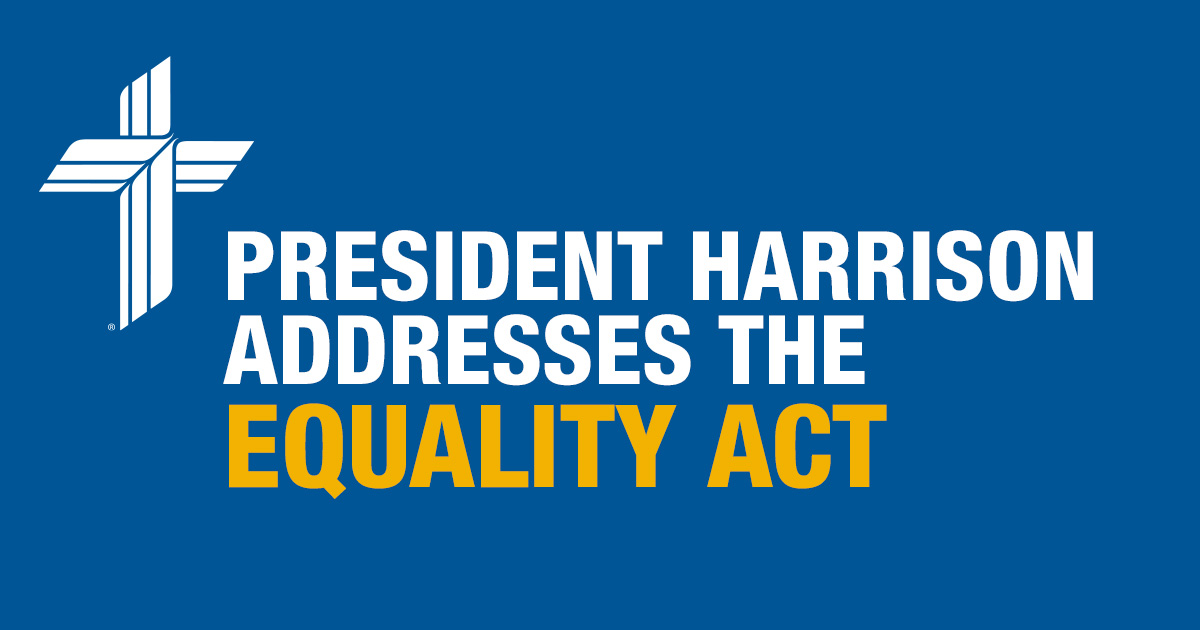 A Word on the Equality Act

To the Pastors, Called Workers and Members
of the 6,000 Congregations of
The Lutheran Church—Missouri Synod

The words of the apostle Peter apply to us now:

Blessed be the God and Father of our Lord Jesus Christ! According to his great mercy, he has caused us to be born again to a living hope through the resurrection of Jesus Christ from the dead, to an inheritance that is imperishable, undefiled, and unfading, kept in heaven for you, who by God’s power are being guarded through faith for a salvation ready to be revealed in the last time. In this you rejoice, though now for a little while, if necessary, you have been grieved by various trials, so that the tested genuineness of your faith — more precious than gold that perishes though it is tested by fire — may be found to result in praise and glory and honor at the revelation of Jesus Christ. Though you have not seen him, you love him. Though you do not now see him, you believe in him and rejoice with joy that is inexpressible and filled with glory. (1 Peter 1:3–8)

The church’s task is not political. It is the proclamation of the Gospel of free salvation in the cross and resurrection of Jesus for all (1 Cor. 1:23; John 18:36). “The Church is the congregation of saints in which the Gospel is purely taught and the Sacraments are correctly administered” (AC VII 1).1

God rules His church by His infallible Word, the Holy Scriptures (John 17:17; 2 Tim. 3:15–16). God rules the state by His eternal law, reason and reasonable laws for the common welfare. “Our churches teach that lawful civil regulations are good works of God” (AC XVI 1; see Rom. 13:1–7). The church should not meddle in government affairs, especially in matters upon which the Word of God is silent. It is also wrong when governments act against God’s eternal law, reason and the basic civil rights of all people. The First Amendment to the U.S. Constitution enshrines this truth. “Congress shall make no law respecting an establishment of religion, or prohibiting the free exercise thereof; or abridging the freedom of speech, or of the press; or the right of the people peaceably to assemble, and to petition the Government for a redress of grievances.”

Throughout history, governments have acted unjustly — sometimes in the name of race, atheism, communism, religion and even Christianity — and curtailed or denied the rights of conscience and the free exercise of religion. And governments continue to do so. Our Lutheran and biblical confession is that “it is necessary for Christians to be obedient to their rulers and laws. The only exception is when they are commanded to sin. Then they ought to obey God rather than men (Acts 5:29)” (AC XVI 6–7; see 1 Peter 2:13–14).

St. Paul made use of his legal right as a Roman citizen (“I appeal to Caesar” Acts 25:11). “Christ’s kingdom allows us outwardly to use legitimate political ordinances of every nation in which we live, just as it allows us to use medicine or the art of building, or food, drink, and air” (Ap XVI 54). Our Lutheran Confessions commend the seeking of public remedy for injustice. “Public remedy, made through the office of the public official, is not condemned, but is commanded and is God’s work, according to Paul (Romans 13)” (Ap XVI 59). Our God-given right to act as citizens is very important, especially now.

The Equality Act is before Congress.2  It sounds innocent. All Americans should enjoy equality and the protections of the U.S. Constitution. But in elevating sexual orientation to a protected class, the Equality Act will bring sweeping changes to current laws, to the great detriment of the religious and constitutional freedoms of biblically faithful churches, institutions, Christian schools and individuals.

Jesus referred to Genesis 2:24, when He stated:

“Have you not read that he who created them from the beginning made them male and female, and said, ‘Therefore a man shall leave his father and his mother and hold fast to his wife, and the two shall become one flesh’? So they are no longer two but one flesh. What therefore God has joined together, let not man separate.” (Matt. 19:4–6)

In fact, those churches and institutions that are bound by the Word of God to the truth of marriage between a man and a woman, and that sex outside of that institution is contrary to the word of Christ and the apostles in the New Testament (1 Cor. 7:2), could be punished for simply standing on our consistent, ancient Christian beliefs. The Equality Act effectively outlaws the words of Christ, the sublime doctrine of Creation, the First Article of the Creed, and our “free exercise of religion” based upon the Bible and Apostles’ Creed. The biblical teaching that marriage is between a man and a woman is to be labeled forever a mere “sex-based stereotype.”3

The Equality Act expands the definition of “public accommodation” and puts an ultimatum to individuals, religious non-profits, food banks, schools, charities, adoption agencies and others: “Change your faith-based practices or face government punishment.”4

Religious schools (K-12 and universities) are a prime target of the Equality Act, which will make it difficult to maintain standards for admission and codes of Christian conduct for students, faculty and staff.5  The Equality Act will forbid college students from using federal tuition assistance at schools that maintain standards of conduct on the basis of the Bible regarding sexual orientation and gender identity.

Sex-specific facilities and female-only spaces could be eliminated. Biological males will have the right to participate in female sports, unjustly denying female athletes at our schools a fair competition and the due rewards of accomplishment.6

The Equality Act will eliminate the significant protections of the Religious Freedom Restoration Act, passed by Congress and signed into law in 1993.7  This law has provided strong protections for “free exercise of religion” in the face of overzealous officials.

The Equality Act contains no conscience protections for medical staff who choose not to perform abortions, even if they have religious objections. Because of its broad definition of “health” services, the Equality Act threatens the Hyde Amendment, which limits public funding for abortion. It also threatens Christian hospitals with elimination of funding for not performing “health” services, including abortion or genital mutilation.

The Equality Act was recently passed by the House and is currently pending in the Senate. The margin is razor thin. If it does not become law now, we can be assured that it will be pressed again. We encourage all LCMS people to:

1. Treat all people with kindness and respect (“You shall love your neighbor as yourself” Mark 12:31), while holding firmly to “the faith once delivered to the saints” (Jude 3).

2. Become informed about the Equality Act and the issues of gender dysphoria. (See “Additional Resources” below.)

3. Consider your role as Christian citizens and make your voice known to your elected officials, particularly in the U.S. House (house.gov/representatives) and Senate (senate.gov/senators/index.htm).

4. Pray for our officials, government and the church in these challenging days.

Martin Luther once said, “Christ dwells only in sinners.” We recognize ourselves as sinners constantly in need of Christ’s forgiveness. We recognize the truth of the apostle Peter’s words, “For it is time for judgment to begin at the household of God” (1 Peter 4:17). We know that Jesus’ opponents grumbled against Him by saying, “This man receives sinners and eats with them” (Luke 15:2). This comforting verse applies to us sinners, and we welcome all others to join us at the feet of Jesus, the sole Savior of all (John 3:16). As Christians, we believe that God has created all people, and all are infinitely valuable and accountable to Him. As Christian citizens, we recognize and demand basic God-given civil rights for all people, even as we insist on the First Amendment rights of Christians.

No matter the course of this or any legislation, Christ will sustain His church. Our hope is not in laws, Congress or courts. Our hope is Christ. “And behold, I am with you always, to the end of the age” (Matt. 28:20).

Finally, all of you, have unity of mind, sympathy, brotherly love, a tender heart, and a humble mind. Do not repay evil for evil or reviling for reviling, but on the contrary, bless, for to this you were called, that you may obtain a blessing.

Now who is there to harm you if you are zealous for what is good? But even if you should suffer for righteousness’ sake, you will be blessed. Have no fear of them, nor be troubled, but in your hearts honor Christ the Lord as holy, always being prepared to make a defense to anyone who asks you for a reason for the hope that is in you; yet do it with gentleness and respect, having a good conscience, so that, when you are slandered, those who revile your good behavior in Christ may be put to shame. For it is better to suffer for doing good, if that should be God’s will, than for doing evil. (1 Peter 3:8–9, 13–17)

Additional resources regarding the Equality Act:

•  Statement from the LCMS Wyoming District

•  Alliance Defending Freedom — The True Impact of the “Equality Act”

3 Equality Act, Section. 2, Findings and Purpose: (1) Discrimination can occur on the basis of the sex, sexual orientation, gender identity, …as well as because of sex-based stereotypes.   Return to statement

4 adflegal.org/blog/president-biden-has-promised-pass-equality-act-heres-how-threatens-your-freedoms. See the Equality Act, Section. 2, Findings and Purpose: (11) Individuals who are LGBTQ, or are perceived to be LGBTQ, have been subjected to a history… of discrimination on the bases of sexual orientation and gender identity by both private sector and Federal, State, and local government actors, including in employment, housing, and public accommodations, and in programs and activities receiving Federal financial assistance…. An explicit and comprehensive national solution is needed to address this discrimination.”   Return to statement

5 LCMS schools serve many who in some way identify with the LGBTQ community. However, our schools have standards of conduct and the expectation of respect for our biblical teachings.   Return to statement

6 Section 1101. Definitions and Rules. “(b)(2) (with respect to gender identity) an individual shall not be denied access to a shared facility, including a restroom, a locker room, and a dressing room, that is in accordance with the individual’s gender identity.”   Return to statement

7 Section 1107. Claims. “The Religious Freedom Restoration Act of 1993 (42 U.S.C. 2000bb et seq.) shall not provide a claim concerning, or a defense to a claim under, a covered title, or provide a basis for challenging the application or enforcement of a covered title.”   Return to statement

Joint statement from CUS presidents on closing of CCNY