KATY, Texas — On a typical Sunday, 850 to 950 people worship at CrossPoint Community Church here.  Only about 600 of them are members.

But that’s OK with Pastor Bill Woolsey, who says the LCMS congregation’s goal is “to be a magnetic community church” that attracts all people — not just Lutherans.

“It’s exciting to us to have more people on Sunday morning who are determining, trying to understand, what God is doing in their lives,” said Woolsey.  “They know they need something, they’ve heard this is a community place, it’s Christian, it’s very conservative in what it teaches, but it’s very expressive and modern in its feel.”

CrossPoint, which has grown from just 40 worshipers as a new mission in 1997, hosted the latest “One Mission Ablaze: Igniting Congregations” event Nov. 12-13.

The conference, the sixth “Igniting” event sponsored by the LCMS president’s office in the past year, foc 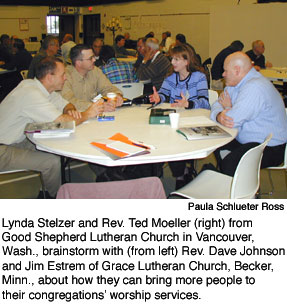 Like the previous “Igniting” gatherings, participants were asked to set new goals for increased worship attendance in their own congregations; share their expertise with the church-at-large; and join with other “Igniting” congregations to plan ways to further those first two objectives.

“In order for a fire to spread, it has to start,” Synod President Gerald Kieschnick told the group, and he encouraged them to share their knowledge with other congregations “so that the flame of Christ’s love will be spread” worldwide.

Participants shared ideas for what works, and brainstormed how 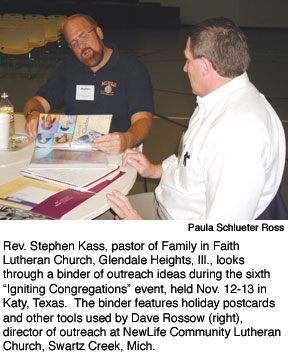 to increase their worship attendance even more.

“Everything we do is with outreach in mind,” said Dave Rossow, director of outreach for NewLife Community Lutheran Church in Swartz Creek, Mich.

For example, when the film “The Passion of the Christ” was showing in area theaters, NewLife families were asked to purchase extra tickets and give them to their unchurched friends.  The event was so successful that only two of nearly 400 available seats were left unfilled, Rossow said.

Get your church’s name out in the community, he says, “and then, when people need a church, they think of you.”  Rossow works with a local company to send postcards — many of them humorous — to some 5,000 area homes three or four times a year.  One woman, he said, liked a postcard so much she kept it for three years before she visited NewLife.  She’s now a member. 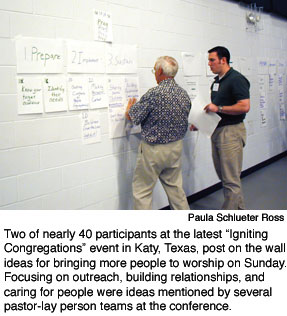 such a loving manner, they don’t leave.”  Genesis began in 1994 with four members — today the congregation has 200.

Rev. Eloy Gonzalez, pastor of Christ Our Savior Lutheran Church in San Antonio, described his congregation as a mix of Anglo, Hispanic and Black members.

Worship attendance increases, he said, when congregations care about people and make them feel welcome.

“It’s got to be heart-to-heart, people-to-people,” Gonzalez said.  “It’s the Lord convincing people that being in that place is important to them because they can receive His forgiveness there.  And that people care about them.”