A veteran LCMS chaplain is fighting to regain access at two Northern Illinois racetracks where he has baptized babies, led worship and checked on the spiritual and physical needs of low-i 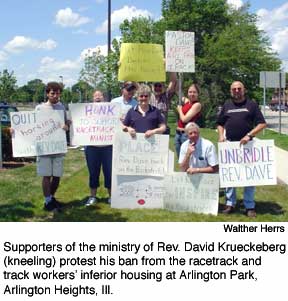 ncome track workers and their families for 35 years.

Since this spring, both the Arlington Park and Hawthorne racetracks in Arlington Heights and Stickney, respectively, have limited Rev. David Krueckeberg’s access to approximately 2,000 workers and their families.

While track management cites safety and security concerns as the reason for the new restrictions placed on “Rev. Dave,” the chaplain and his supporters contend the real reason is the pastor’s efforts to improve track housing that has been unfavorably compared to some stables.

“The housing is atrocious,” said Krueckeberg, describing how a worker’s family squeezes into a single room without private baths or cooking facilities.  Dumpsters filled with straw and manure sit nearby.

Throughout the summer, the racetrack-chaplain controversy has generated local headlines and drawn protesters to Arlington Park.  Supporters include members of Faith Lutheran Church, Arlington Heights, which serves as the base for Racetrack Ministries, Inc., the nonprofit founded by area congregations to oversee and finance Krueckeberg’s work.

“At 68, picketing isn’t my cup of tea, but I’m happy to do it if it helps Rev. Dave get back to the people who need him,” said Joan Henning, a Faith Lutheran member.

“Despite what the tracks say, Dave’s access has been limited because he made waves by calling attention to poor living conditions,” said Rev. William Majer, Faith’s pastor.  “Dave has a heart for the track workers — people who otherwise wouldn’t be ministered to.”

A thoroughbred lover since he was a boy, Krueckeberg, 61, called the plight of racetrack workers to the attention of Concordia Theological Seminary (then located in Springfield, Ill., now Fort Wayne, Ind.) when he was a student.  After his graduation in 1969, the English District’s mission board called him to serve as the first chaplain at the Northern Illinois tracks.

That same year, the Illinois Racing Board licensed Krueckeberg to serve on the backstretch.

When a lack of funds forced the English District to cut its mission budget in the late 1980s, area congregations founded Racetrack Ministries.

Before his ban, Krueckeberg made daily racetrack “rounds,” praying with the sick, performing weddings and coordinating a vacation Bible school for track workers’ children.  He established a scholarship program that enables about 33 of those children to attend area Lutheran schools each year.

At press time, the Arlington racetrack had announced plans to build new dorm rooms and had hired a non-denominational chaplain who, unlike Krueckeberg, is paid by the track.  Both tracks continue to forbid “Rev. Dave” to walk the backstretch and provide pastoral care.

Krueckeberg compares the situation to a hospital preventing a parish pastor from calling on his parishioners.

“This is a battle for Christian ministry,” said Krueckeberg, who has launched a letter-writing and petition campaign asking track management to restore his unlimited access to track workers.  “This is about the need to serve people spiritually and physically.”

“This dear pastor recognized injustice and called it what it is,” Harrison said.  “We are proud that Pastor Krueckeberg is in this struggle, in the name of Christ.”

Kim Plummer Krull is a freelance writer in St. Louis who writes for LCMS World Relief and Human Care.