A dozen Tagakaulo men graduated in March from the pastoral training program of the Tagakaulo Lutheran Church of Christ in the Philippines.

They are the first Tagakaulo pastors to serve the six-year-old church body, located in the southern Philippines 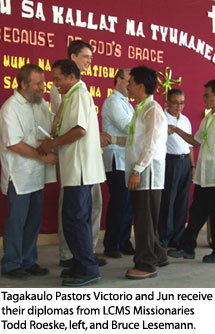 on the island of Mindanao.

The pastors were taught by LCMS missionaries, who began serving the Tagakaulo people in 1987.

Dr. Allan Buckman, a former Synod mission executive who attended the March 18 graduation service in Mindanao on behalf of LCMS World Mission, called it a “milestone event, not only for the Tagakaulo Lutheran Church of Christ, but for Lutheranism in the Philippines as well.”

“Not only does this emerging indigenous church now have the leadership it requires,” Buckman said, “but a strong Lutheran presence in the form of 26 congregations, with a membership of over 3,000, has now been firmly established in the southernmost part of the Philippines.”  There are about 35,000 Tagakaulo people in the Philippines, according to Buckman.