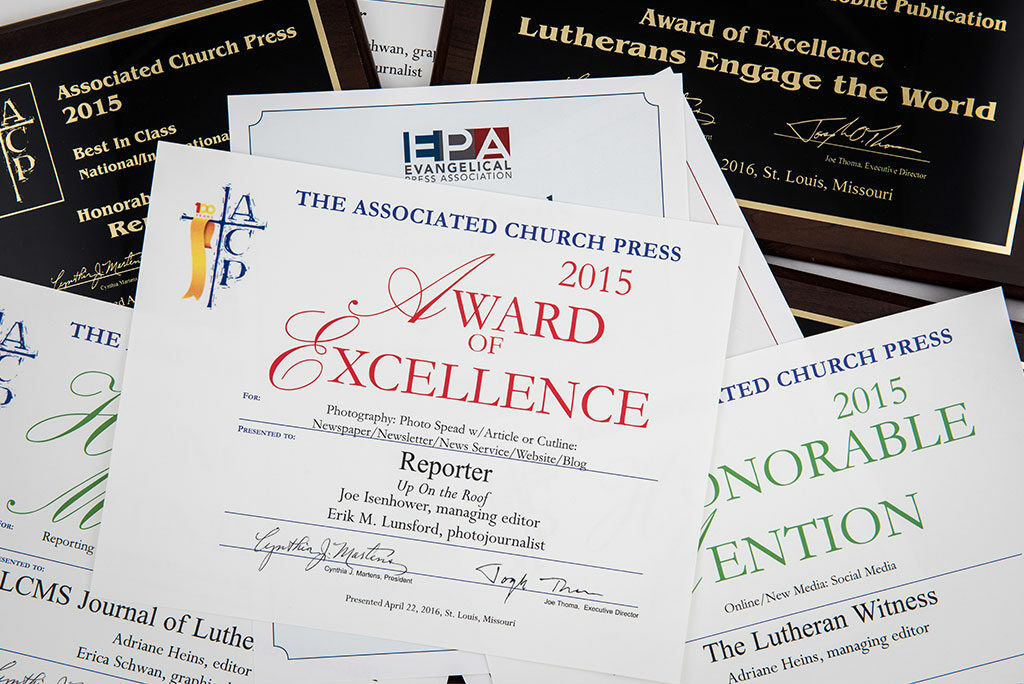 The Lutheran Church—Missouri Synod’s Communications department and the four periodicals it produces — Reporter, The Lutheran Witness, Lutherans Engage the World and the Journal of Lutheran Mission — received a record 24 total awards from the Associated Church Press (ACP) and the Evangelical Press Association in this year’s competitions for work published in 2015.

Twenty-one of those awards were presented by the ACP April 22 during its “100th anniversary” conference in St. Louis. The ACP — the nation’s oldest interdenominational religious press association — was founded in 1916 in St. Louis.

Among those awards were five in the “Best in Class” category:

Also received by LCMS Communications in the ACP’s “Best of the Christian Press” competition were:

Reporter also won a third-place award — for publications as a whole — from the Evangelical Press Association (EPA) in the “Denominational” category during its April 6-8 convention in Lancaster, Pa.

Receiving individual “Higher Goals” awards from the EPA were:

“Last year at this time I used the term ‘bumper crop’ to describe the number of awards — 15 — our department won,” said David Strand, executive director of LCMS Communications. “That was our best showing ever.

This year’s 24 awards, “as in past years … reflect a broad cross-section of the department’s output: all four major periodicals; online publications, newsletters and news service; a PR/marketing campaign; a full-length book; and photography.

“Regarding the latter, our managing photojournalist, Erik Lunsford, received a remarkable eight awards. As far as I know that’s unprecedented.

“We had group winners and individual winners,” Strand continued, “but I know that everyone receiving a prize would be quick to point out that all of our staff shares in these honors, including those who, owing to the nature of their jobs, are precluded from submitting entries.

“We are a team. We collaborate with one another every day, and we feel blessed by God to help the offices and ministries at the International Center tell their stories to the church and beyond.”

Also honored this year by the ACP were: